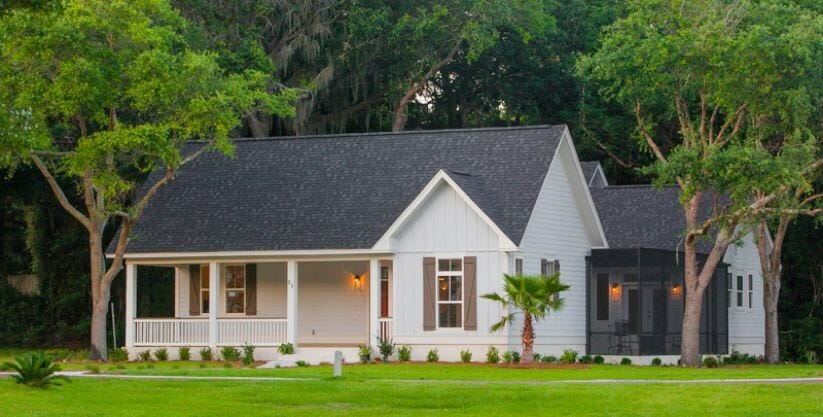 A successful land broker in Myrtle Beach, South Carolina named Joe McVay, one among several mentors he sought out at the start of his business career, once told Billy Gavigan, “if you’re a good Marine, you will be an amazing civilian and an awesome employee.”

New To The Area

Gavigan Homes, one of a portfolio of companies operating under the umbrella Gavigan Group, builds in and around Beaufort, a town of 12,000 and South Carolina’s second-oldest city, located in the Sea Islands and low country at the bottom of the state. Beaufort is a historic town close to a U.S. naval hospital, a Marine Corps Air Station and the well-known Marine training base, Paris Island. Its history and location also makes Beaufort a magnet for retirees looking for somewhere that’s warm but not crowded, bucolic but accessible to the amenities of well known but more densely built retirement havens such as Myrtle Beach or Hilton Head. 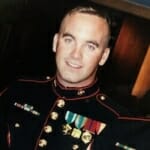 Originally from upstate New York and from a family long involved both in homebuilding and the military, Gavigan came to Beaufort as a Marine Corps trainee. He decided to settle in the area as his 11-year Marine Corps career—a specialist in counterterrorism and someone highly trained in deactivating bombs—was winding down. He got involved in land development, then real estate and, ultimately, residential construction. The Beaufort area appealed and future business opportunities loomed, provided he could connect with those in the area who were players.

He took the elevator.

“I did what he said to do,” Gavigan says, referring to McVay, one of the first area developers who helped him get his start in land acquisition. “I just rode around and learned the business. I knew to keep my mouth shut and listen.”

He began building houses in 2007 and 2008, just as an overinflated national housing market neared collapse. Thecollapse saw homebuilding plummet from more than two million annual housing starts to fewer than half a million, driving thousands of builders out of business.

But home building, like real estate, Gavigan points out, is “a micro market economy.” That is, it can be awful just about everywhere, but very good in specific places; if the circumstances are right. In Beaufort, one of those circumstances had to do with the fact that there were so many government employees. It was also the case that while credit was tight and other local builders were scrambling, “we had capital,” Gavigan says. Enough to start 10 or 12 houses at a time, for buyers he knew would be there. “We were the only ones building.”

Having spent more than a decade in the Marine Corps, Gavigan knows the demands a military career makes on families. He’s also familiar with the expectations a military mindset creates, which is, as one his suppliers, James Hardie’s representative Scott Leiti, points out “a different mindset from the civilian.” Civilians might think nothing on viewing a messy construction site, “but you know a successful company by the way it presents itself,” Gavigan says. Military people take the idea that a jobsite should be clean and orderly at the end of the day for granted. They also expect a task, or a job, to be completed on time. Orders are orders.

For example, last November, Lt. Colonel Hank Thomas, stationed in Japan and newly assigned to the Marine Air Corps base in Beaufort, flew into the area with days to find a place to house himself, his wife and their seven children. He did not want to build a house, but simply wanted to find an existing house to buy. Unfortunately, there were not many homes that could accommodate his large family and nothing standing proved suitable.

After looking for a few days, the realtor he was working with suggested Thomas and his wife talk with Gavigan Group, which owns lots on the water as well as tracks further inland and would be willing to work with architects to modify plans and build something that would suit the family. In deciding to sign a contract with Gavigan “a lot of it goes back to the fact that he was a Marine and has built homes for other folks in the area that are also Marines,” Thomas says. “And that our realtor had high praise for him.”

Before signing, Thomas and his wife carefully perused the internet to find feedback on Gavigan Homes. They came across their GuildQuality profile and saw that on 10 separate criteria, 23 past customers rated the company 100%, i.e., as good as it gets. Going to look at some Gavigan houses sealed the deal. “It looked like everything was built beyond code,” Thomas says. “Extra steps had been taken. He does little things you don’t see, like extra rebar in the foundations, that improve the quality and value.”

The Thomases were clear about the fact that, already facing the pressure of moving a large family halfway around the world, they needed to have the house finished quickly, and with the assurance that there wouldn’t be any avoidable delays. In that sense, too, they found they had picked the right builder; one with the right, to use Gavigan’s term, operational tempo. “One of the things that gets hammered into us as Marines,” Thomas says, “is a focus on planning and a regimented process that envisions potential pitfalls and ways to prevent them from happening.” He could, he says “clearly see that” in the Gavigan Group’s dealings with vendors and subcontractors. It was, Thomas says, “the first and most obvious lesson he’d applied from the Marine Corps.” The second was “a willingness to do whatever is necessary to get the job done.”

For example, the dirt. After clearing the lot of trees, the builder discovered that there was so much muck in the soil that it wouldn’t pass the soil compaction test. “They had to remove the muck and bring in that much fill dirt,” Thomas recalls. Twenty-seven dump trucks of muck were removed, and the lot filled in with compactable sand and granite. “He did it on his own dime,” Thomas says, “and didn’t charge us for it.” 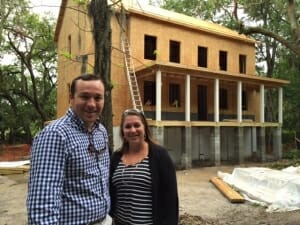 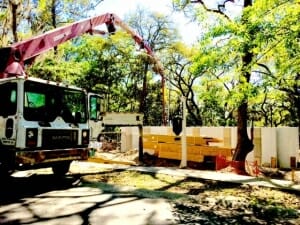 The Thomas house under construction.

Gavigan Homes’ focus as a homebuilder is on the customer first—whether it’s military personnel or retirees seeking peace, privacy and a refuge from cold weather—and the product secondly. The company can and will build for first-time buyers as well as for those seeking custom homes on choice waterfront locations.

“His strength”—when it comes to estimating, materials selection, land purchases, all of it—“is knowing where he’s good and where he’s not,” Leiti says. And where he’s not, “he defers to experts. He’s very self-aware and he allows his team to run.”

Gavigan Group says his company is now the sixth largest spec builder in the state, a fact he is quick to credit to first tier subs, vendors, to the extras he offers in design for elements such as wind sheer an seismic events, and to marketing that starts from an understanding of who the customer is and what that customer wants: quality combined with affordability. To check out more projects and feedback for Gavigan Homes, visit their GuildQuality profile page.

Want to learn more about what it means to be a member of GuildQuality’s community of quality? Take the tour and you’ll see how companies like Gavigan Homes use our services to build a better business.