Each quarter, we send out our Market Predictions Survey to home builders, remodelers, and contractors to get their opinion on the current state of the market as well as changes they expect to see in both the market and their company. The fourth quarter results are in and while there’s improvement from Q3 to Q4 overall, sentiments are not quite where they were in Q4 of 2014.

Current State of the Market Results 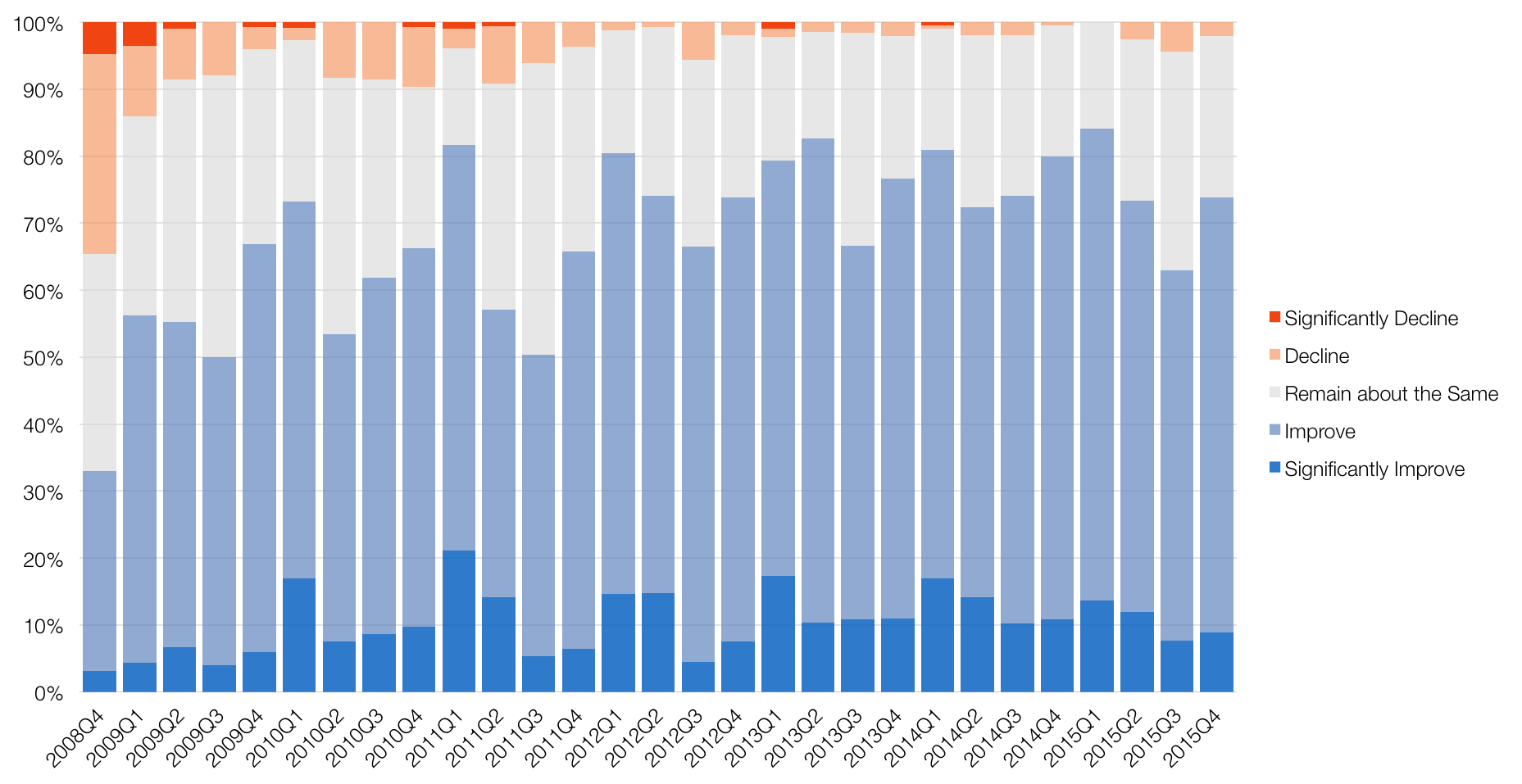 As you can see from the chart below, we’ve noticed a trend forming over the last 5 years with how our respondents expect the market to change. Looking at 2010 and beyond, Q1 sentiments are almost always the most positive, then they fall in Q2 and Q3, and then increase again in Q4. 2015 showed the same trend, with 40.1% of our respondents saying they expect the market to “Improve” and 2.6% saying it would “Significantly Improve.” That’s a significant increase from Q3 where only 25.4% of respondents thought the market would “Improve” and 1.1% thought it would “Significantly Improve.”

Expected Change in the Market Results 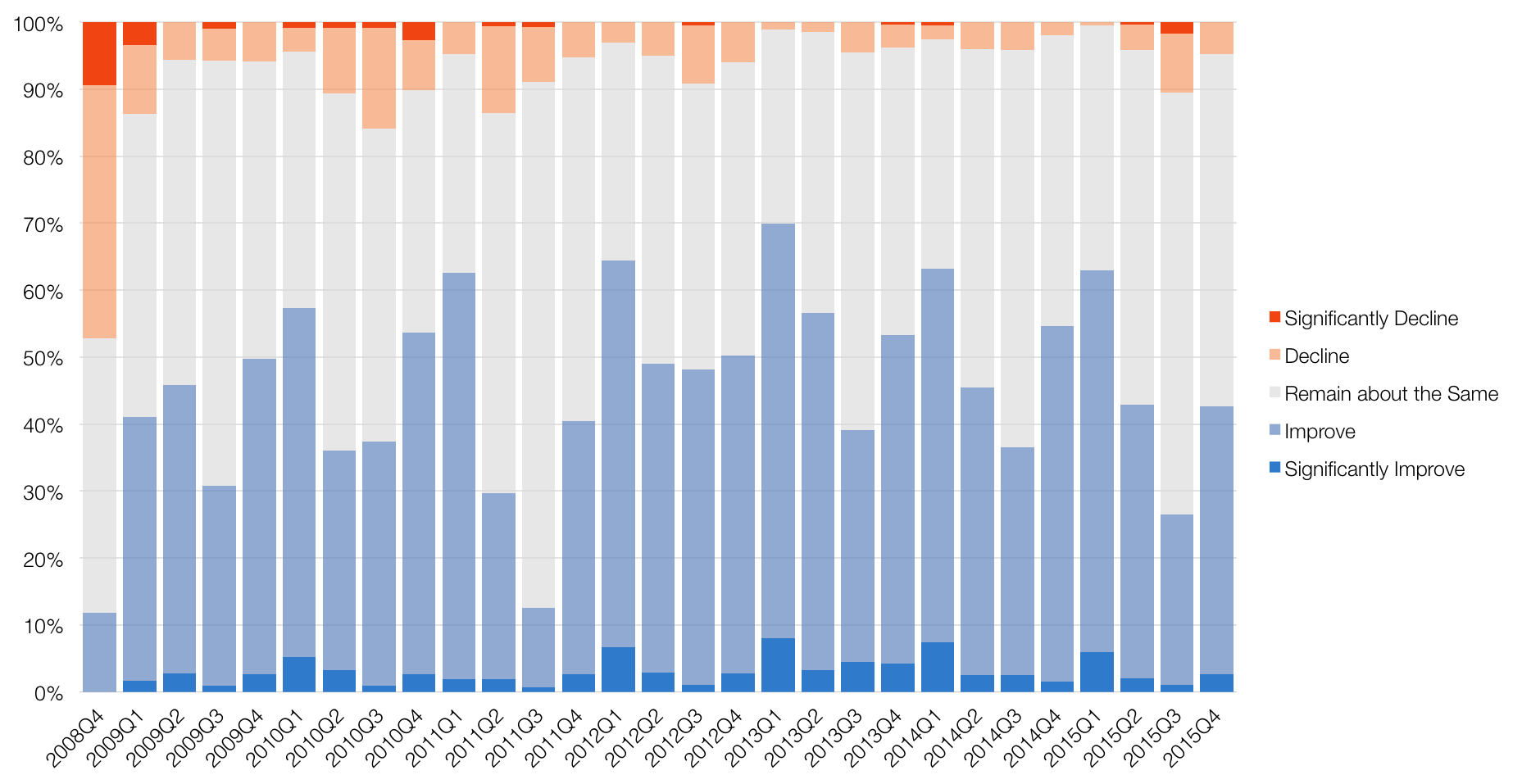 This question tends to follow a similar trend to the change in the overall market, with more positive sentiments in Q1, a drop in Q2 and Q3, and then a jump back up in Q4. We saw an increase of 10.9% in overall positive sentiment from Q3 to Q4. In Q3, 55.2% of respondents said their company performance would “Improve” and 7.7% said it would “Significantly Improve” compared to 64.9% “Improve” and 8.9% “Significantly Improve” in Q4.

Similar to what we saw for the expected change in market between Q4 of 2014 to Q4 of 2015, there was also a decrease in confidence that company performance would improve. 80% of respondents answered positively (Improve or Significantly Improve) in Q4 of 2014 versus 73.8% in Q4 of 2015. This is a much smaller drop of 6.2% compared to the drop in market expectations of 13%, so our respondent’s outlook on company performance is brighter than their outlook on the market as a whole. 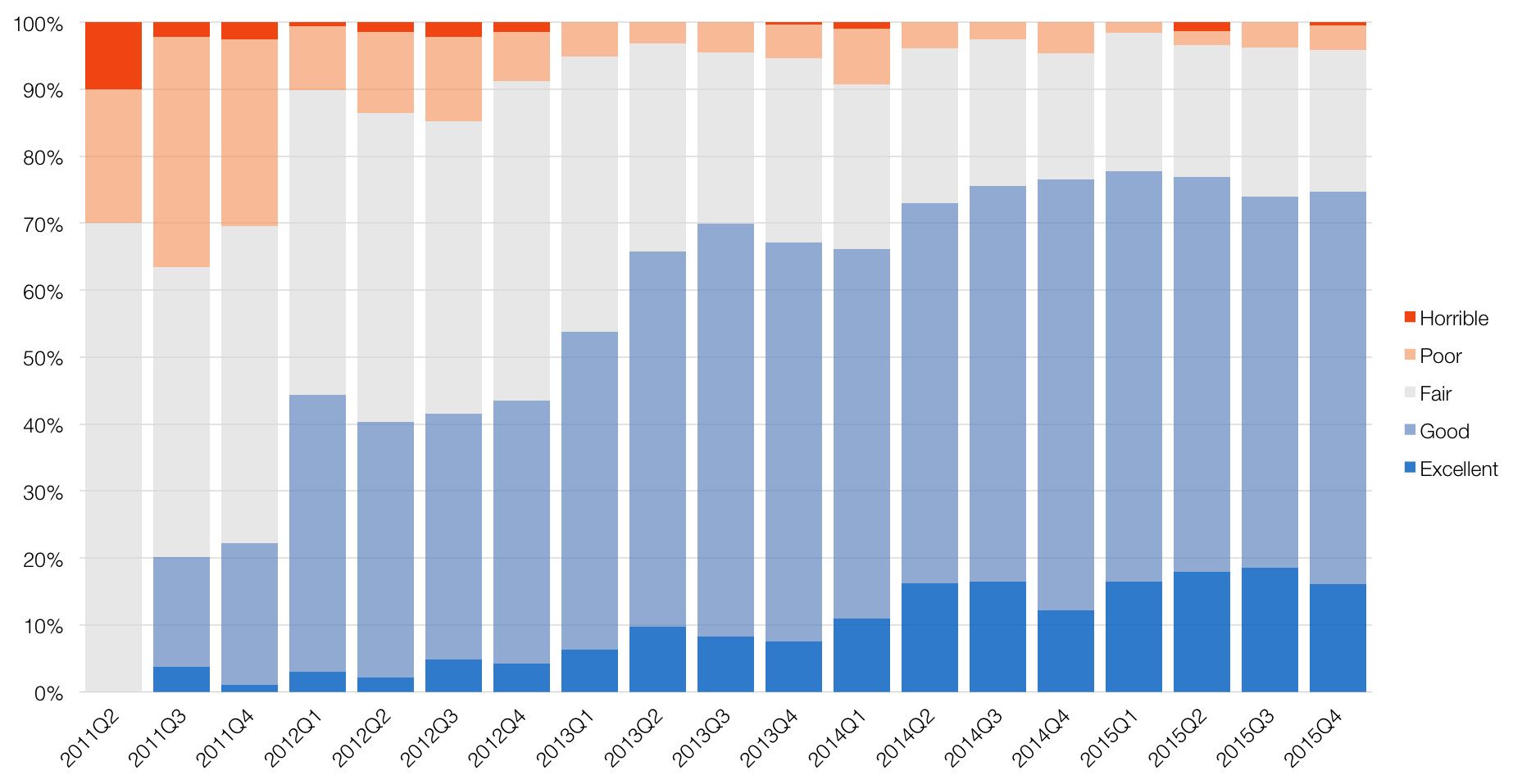 This question aims to get a gauge from our respondents on any new trends they’re seeing as well as trends that may be fading out. We received lots of answers around emerging trends, but the three that we saw the most were:

In line with those trends, respondents also shared they were doing more kitchen and bath remodels as well as larger remodeling and home improvement projects in general. Another interesting trend that a few respondents shared – customers are more informed now than they ever have been before.

As for the waning trends, the one we heard the most was customers looking for the lowest price. According to one respondent, “Customers are staying in their homes longer and [are] willing to invest the extra money to get a better product they can enjoy.” Another respondent shared, “Customers are reaching more for the value and long term solutions/investments.” Three other waning trends we saw were:

Near and Long Term Strategy

We found that all of the near and long term strategies from the Q3 Survey Results were just as prevalent in Q4. Those strategies were:

At the end of the survey, we provide a space for respondents to share any additional comments or concerns they have. Here are a few of the most interesting comments we received.

“Trades people are becoming extinct. We need to get kids into the trade programs. Someone has to build the table that the computer sits on!”

“We anticipate sales to fall off near the election as uncertainty increases in the marketplace.”

“We thought we were good, we had hundreds of A rated reviews, and 5 star reviews. We signed up with GuildQuality and after the first round of surveys, our true character and reputation was revealed to us. This has been a humbling experience to know what our customers really think about us. Changes have been made immediately to our process and I can now say we are moving in the right direction.”

“Companies tend toward recklessness as economies improve. We believe in measured expansions in order to provide excellent customer experiences. This priority will help protect our reputation as we broaden our customer base.”

Line of Business and Region