With over 2,000 home builders, remodelers, and contractors as Guildmembers, our community has a good sense of the current state of the market. That’s why we send out our quarterly GuildQuality Market Predictions Survey to over 5,000 people in our community of quality – to get a clear picture from those that are working day in and day out and know the ins and outs of the industry.

In Q2 of 2016, positive sentiments increased greatly, from 74% in Q1 to 81% in Q2. Results showed that 81% of our respondents felt that the current state of the market was in either good or excellent condition, which was the highest percentage of positive sentiments we’ve seen on this question since we began tracking it back in 2011. This is also a 3% improvement from 77% in Q2 of 2015 to 81% in Q2 of 2016. 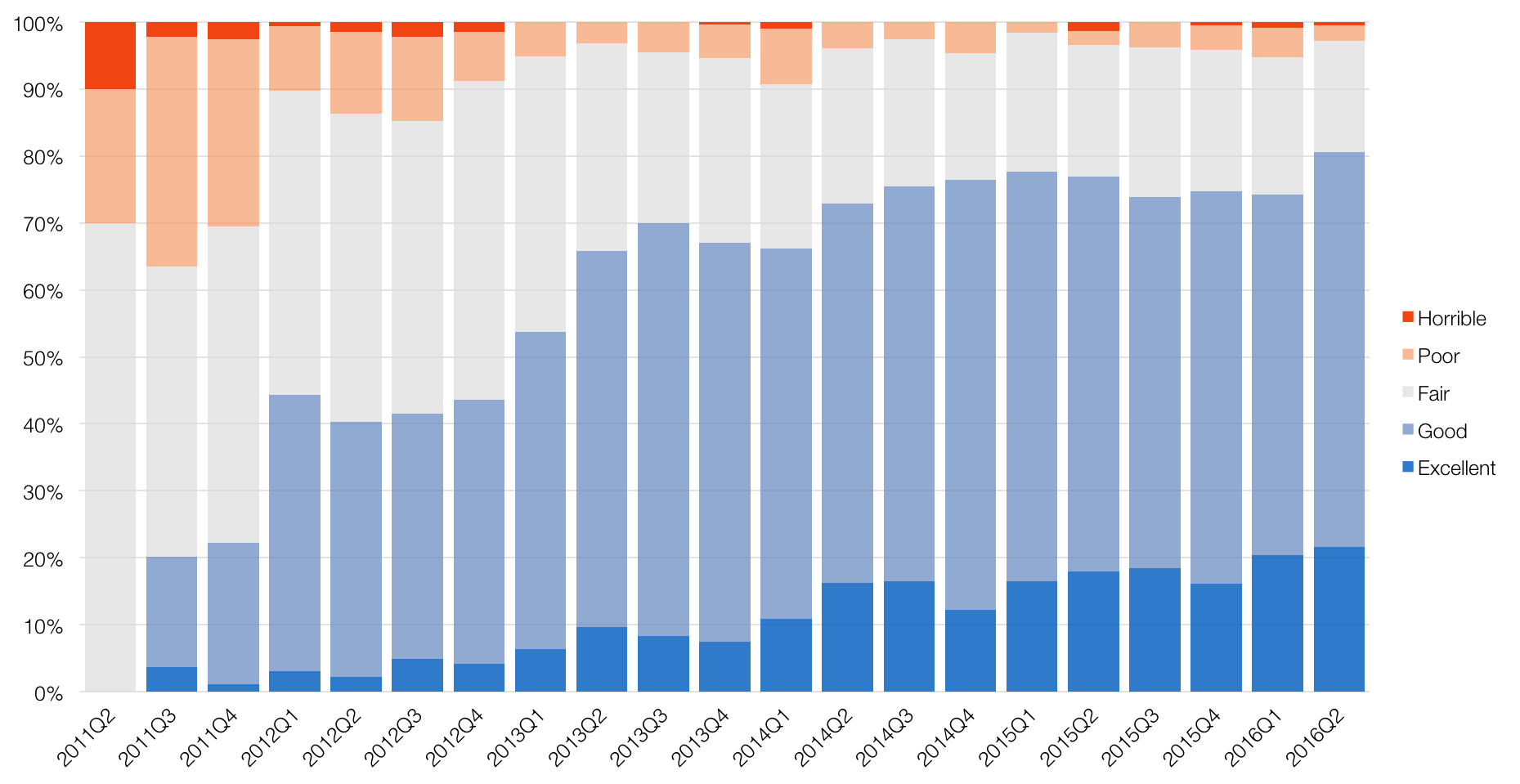 When we look at Q2 of 2016, we see an even further decrease in positive responses regarding the expected change in the market from Q1. Only 28.3% of respondents answered “Significantly Improve” or “Improve”, whereas 62.5% think the market will “Remain about the Same.” We also saw that nearly 10% of respondents think the market will either “Significantly Decline” or “Decline”, which is up from 3% in Q1 of 2016 and 4% in Q2 of 2015.

While these results don’t necessarily indicate that the majority of respondents think the market is getting worse, overall responses are much less positive and more neutral than they were in 2015. 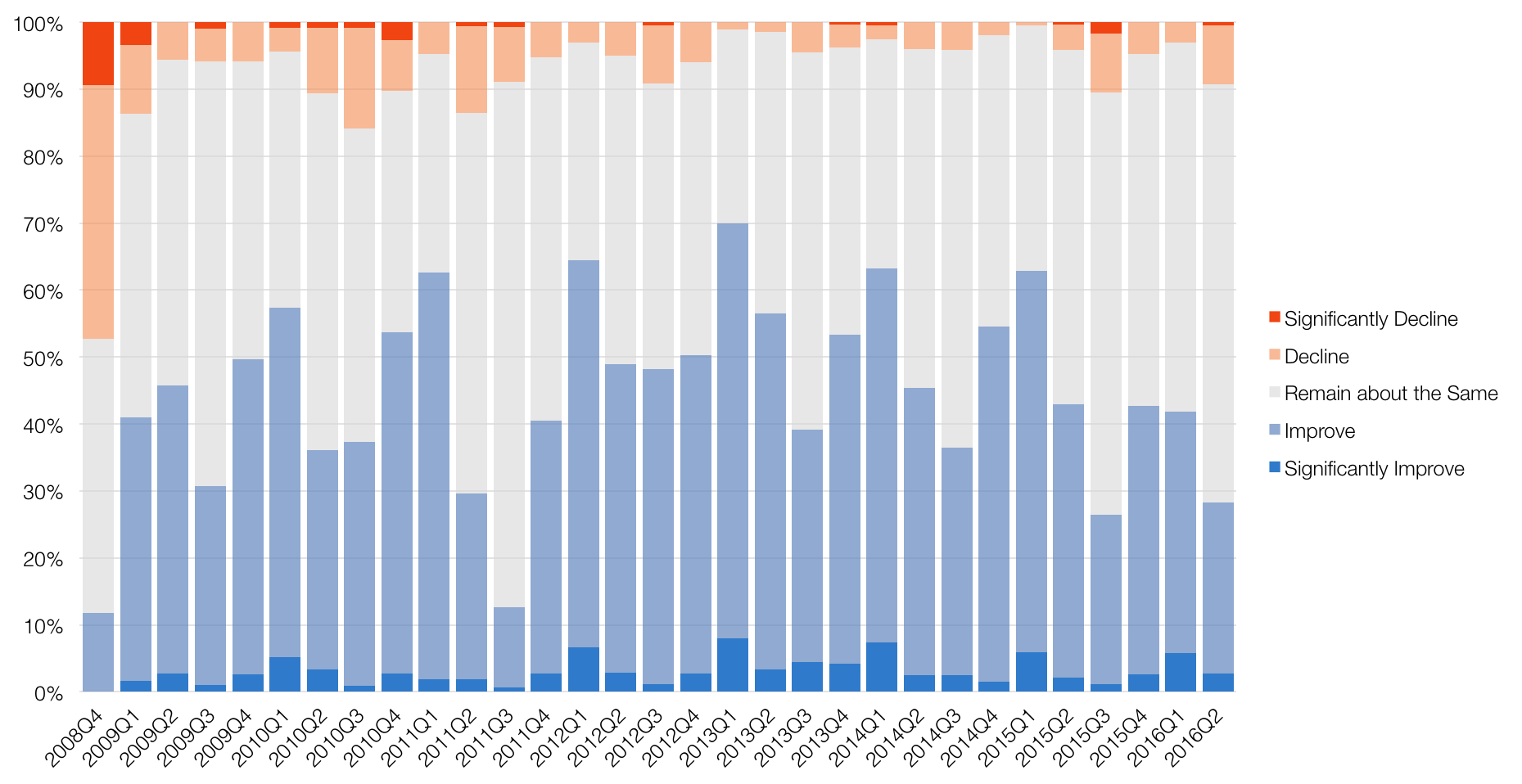 In keeping with the trends in expected change in the market, positive sentiments towards expected change in company performance have been down quarter over quarter as well as year over year in 2016. While we did see a 2% increase in respondents who indicated “Significantly Improve” or “Improve” from 74% in Q4 of 2015 to 76% in Q1 of 2016, those positive responses dropped 12% to 64% in Q2 of 2016.

When we look back to the first half of 2015, 84% of respondents felt their company would improve in Q1 and 73% in Q2. Year over year, that’s a decrease of 8% in Q1 and 9% in Q2. While we still have over half of respondents that feel their company will improve to some extent in 2016, they’re definitely less optimistic than they were the same time last year. 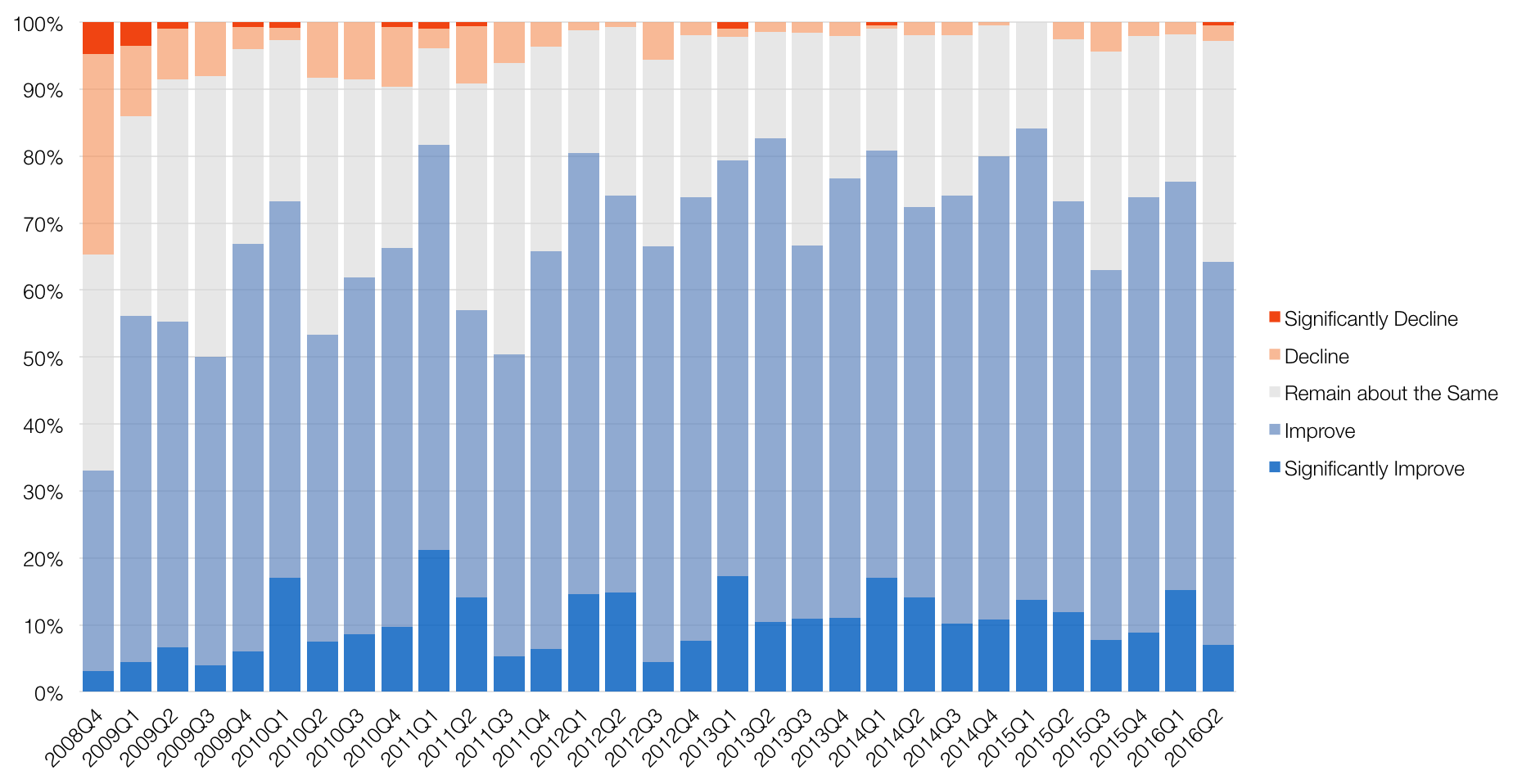 Looking across results from Q1 and Q2 of this year, the emerging trend that came up most in surveys was that customers are more tech savvy and are going online to do more research. They’re looking at online reviews and researching multiple companies before making decisions. They’re also using the internet to research products and design styles they like.

“A lot of customers are more tech and Internet savvy nowadays. Therefore, they are able to price shop a lot of materials for their project.”

“Clients are very interested in hiring professionals with a proven track record and doing business with a company that has a significant history of past reviews.”

A few other emerging trends that came up the most were:

The most popular emerging design trends we saw included:

When we asked our respondents to indicate trends that are fading or going out, the two that were shared the most were

“Clients are willing to pay for what they want and they’re not focused only on price.”

“We see less focus on price and more on quality and performance.”

The other most popular waning trends that were shared include:

As we looked at near-term strategies from our respondents, an overwhelming amount of them mentioned recruiting and hiring as their biggest challenges and that this would be their main focus in the near-term. We reported the same results back in our 2015 Q4 Market Predictions Survey Results, so it’s quite evident that the labor shortage is still a prevalent problem.

“Currently our most pressing challenge is finding qualified workers to complete our projects.”

A few other near-term strategies respondents said they were focusing on were:

When we looked at responses regarding long term strategies, there were many similarities from the near-term responses. A heightened focus on marketing, advertising, and social media was the number one response for long-term focus among respondents.

“We’re increasingly trying to do more advertising through online mediums,” said one respondent. “The industry has long been about repeat and referral business, but we see that pendulum swinging towards online marketing. We know that our client base is aging, and want to capture those millennial clients while they are still young.”

“Lots of marketing to increase our SEO. More than half of our leads and one third of sold jobs are people who found us on an internet search.”

Other areas of focus for the long term were:

“We are compiling process maps, outlines, and checklists that outline our process as a whole. From this, we are hoping that it will be a useful tool as our company grows and changes and will also help to make sure that parts and pieces do not get missed throughout the process.”

Below are a few additional comments from our respondents that we thought encompassed their overall struggles and successes.

“While the market is very strong in the near term I do fear the long term repercussions of the current ease of lending and spending that we are seeing — the years of stagnation followed by years of boom like growth really make it difficult to hire, train, and grow employees in a healthy long term way.”

“What you do today will not be good enough for tomorrow. You’re always having to add systems, come up with new marketing ideas, and constantly change and add to the web site.”

“One of the things we see on the horizon that is of real concern is the inability of first time home buyers to enter the market because of the massive amounts of student loan debt they are carrying. This may have a significant impact not just on housing but across all of our economy because that capital is not available.”

“We are experiencing a lull in our Spring business which caught us by surprise. After talking to many tradesmen, they are experiencing a flat Spring as well. One large chimney company said he has tracked this trend and contributes it to the election. He said every 4 years, his business is flat. Once the election is over, it picks up regardless of who’s elected.”

Below is a breakdown of the lines of business of our survey respondents.

Below is a breakdown of the regions where our survey respondents are from.

To learn more about our quarterly survey, contact marketing@guildquality.com.