We’ll prove our value with 30 days of our full service, for free. Fill out this form, or call us at (888) 355-9223. We'll answer your questions, show you a demo, and get you started with your free customer surveys. 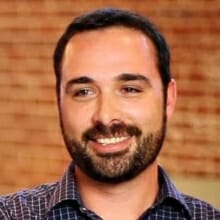 We sat down with Jerrod Butler, Director of Business Development here at GuildQuality, to speak with him about his journey with the company, as well as what he believes makes us stand out among the competition.

After graduating from the University of Georgia, you interviewed with several companies. What was it about GuildQuality that appealed to you the most?

Prior to my interview with GuildQuality, I had only been interviewing with Atlanta staples, like Coca-Cola and Delta, and I wasn’t even considering a sales position. But GuildQuality was refreshingly different; within the first five minutes, I met everybody in the company (at the time)! Afterwards, I took some time to reflect on everything, and I realized that those other opportunities would always be there, but the one with GuildQuality wouldn’t be. I wanted to try something different, so I did.

What do you mean by, “refreshingly different?”

I think I just knew that my contribution was going to make a visible impact. The fact that I met Geoff Graham, GQ’s Founder and CEO, within the first five minutes of being there really appealed to me. At the time, he was still in commercial real estate, which I was also interested in. Everyone was so welcoming and seemed happy to be there, and that’s what drew me in.

Companies put a lot of emphasis on the appeal of their corporate culture. What’s unique about GuildQuality’s company culture?

Geoff Graham. GuildQuality is a reflection of Geoff, and our growing team. GuildQuality is extraordinarily unique. In fact, our unique culture is what I found most refreshing in comparison to the other companies I considered early on in my career. We really do practice what we preach, and are truly a ‘Results Only’ work environment. Even as we’ve gotten larger, and added more and more remote employees, our company culture has stayed strong.

Speaking of Geoff, what sets him apart from the other owners and executives you’ve gotten to know during your time at GuildQuality?

How long do we have? A colleague once said that Geoff “lives in the future.” He’s a radical dude, but he’s rooted in integrity, ethics, and a moral code that gives me peace of mind that he won’t be too radical. You can count on him to challenge your ideas, but trust him not to upset the apple cart.

In your mind, how does GuildQuality’s social environment stand out?

We take our time, almost to a fault, in our hiring process, to make sure that we get the right people; the ones we believe will succeed. One of our peers in the Atlanta software industry uses something called the ‘Canoe Test,’ which asks, “Would you be able to spend the day with that person in a canoe?” That always sticks in my mind as something to consider when there is a possibility of hiring. Yes, it’s important to hire those who are smart, self-starting, and accountable, but if you wouldn’t enjoy spending any time with them, then it’s not going to work.

How had GuildQuality helped you develop professionally?

In an environment like GuildQuality was in the beginning, you are very much responsible for everything. I’m a strong believer in total emersion, as far as learning is concerned. You get that here. At the time, I had a team backing me up, but I was counted on to sell a service. It’s such a small and transparent atmosphere that you have to do what you say you’re going to do, when you say you’re going to do it.

Since your start date, how has your role changed at GuildQuality?

I started as territory manager in 2008. Back then, all territories were split among only four of us. Plus, like most people in the residential construction industry, GuildQuality hit the skids in 2008. I was stubborn enough to stick it out, and a few years later, we began to see a light at the end of the tunnel – as did the rest of the industry. Although we decided to bring on several more sales people, I was getting to a point in my role where things were getting too comfortable and monotonous. So I asked for more responsibility and became the Director of Sales. For a few more years, I hired for the sales team, and in the process, I discovered that I really enjoyed the business development/partnership creation side of my role. We were having such success with that part of the company that we wondered what we could achieve if we devoted more of our resources to it. In June of last year, I transitioned to Director of Business Development, which is where I am today.

Growing along with the company is so important. What kind of opportunities do you feel you’ve had at GuildQuality that you wouldn’t have elsewhere?

The nature of our service allows us to work directly with owners and executives of businesses. We directly impact the way that they do business and the way that their clients are treated. That’s a level of influence that I don’t think you can achieve at any other software business, especially one of our size. In addition to that, I have a lot of flexibility in my role internally. I really get to experiment with things, throw new ideas against the wall, and see what sticks – while still having the support and safety net of a profitable business behind me. It’s very entrepreneurial, but at the same time, it’s safe.

How has GuildQuality changed over the years to keep up with the industry?

I think this is a constant challenge, because as a software company, we always have to be innovative. We rely on contracts from companies who get to decide every month if they’re going to stay on with us. The only way we stay afloat is by staying ahead of the curve. The most obvious changes have come with the advent of consumer review websites. It’s been a challenge in it’s own right because we walk the line of being this operational tool that our members can count on to promote their businesses, and wanting negative feedback to pinpoint problems, but public facing components of our services can bring pause. Managing that, or straddling that line, is an ongoing challenge.

What are you most proud to tell people about GuildQuality?

That we made it through the great recession. We’ve always been an open book here at GuildQuality, and I was intimately familiar with how close we were to not making it – like so many other companies in this industry. But we did the right thing, we were accountable to each other and our clients, we prevailed, and it made us better.

What does that mean, “We did the right thing?”

We did what we said we were going to do. Don’t lie cheat or steal, and always be nice. Patrick Swayze in “Roadhouse” is one of our influences here. “Be nice.” I think most things are pretty much that simple.

Interested in a career at GuildQuality? Check out our current job openings!

We’ll prove our value with 30 days of our full service, for free. Fill out this form, or call us at (888) 355-9223. We'll answer your questions, show you a demo, and get you started with your free customer surveys.