Last month, we ran a contest to recognize amazing remodeling projects within our community of quality. We were excited to see so many people vote to help us name our first ever “GuildQuality Next Top Remodeler,” Allen Construction, for their breath-taking whole home remodel.

Allen Construction is a general contractor located in Santa Barbara, California and they’ve been Guildmembers since 2013. To honor their victory in our Next Top Remodeler contest, we wanted to give you a behind the scenes look at what this award winning project was all about. We spoke with Vice President of Sales, Ian Cronshaw, to take a deeper dive into this remarkable project.

The homeowners, New Jersey residents looking to move to California, bought what started out as an old, outdated 1960’s California ranch home. It was poorly placed on what they found to be an amazing lot with beautiful views. 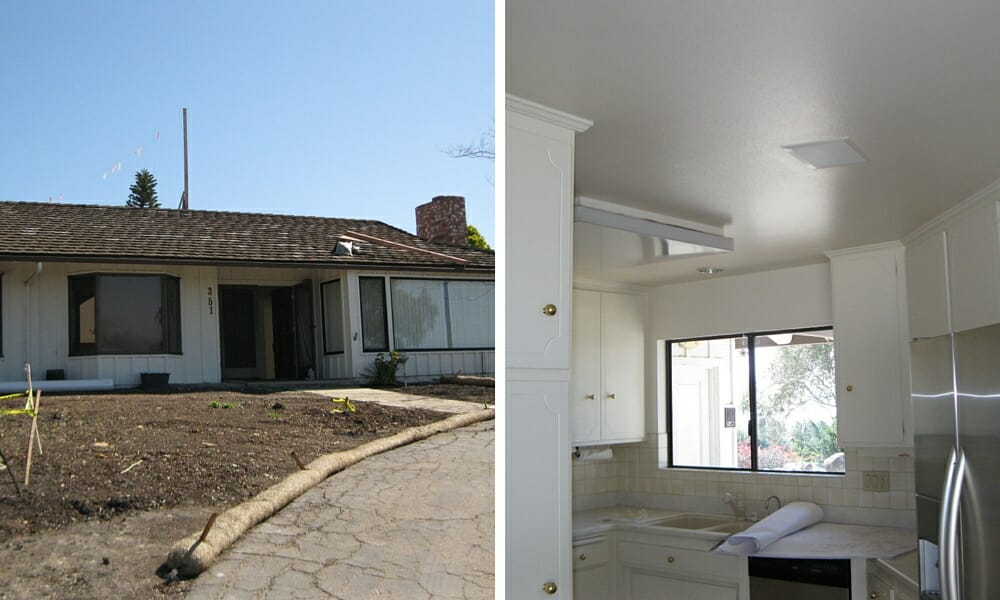 They recognized the potential of this piece of property and it was their real estate agent that connected them with Allen Construction. The Allen team met with the homeowners and learned their goals:

After that first meeting, Ian shared, “We left the meeting with a handshake and the homeowners saying, ‘we like you, trust you, and would like to work with you’. There was fabulous energy from the beginning. This was one of those dream jobs.”

Because the homeowners were still living in New Jersey, there was a lot of communication that had to take place in order to ensure things went according to plan. Ian shared that they only met with the homeowners in person 2-3 times, so communication was vital for the success of this project. Allen Construction was able to manage expectations and keep things on schedule by having weekly phone calls, exchanging numerous emails with photos, and weekly wrap ups of what had been completed and what was going to be done next week. Ian said, “We had numerous emails and phone conversations with our supervisor on site, plus, I live a mile away from this project, so I’d stop by on my way to the office or on my way home.”

Since the original house was so small and poorly built, there wasn’t a whole lot to be salvaged. “We kept a few walls and parts of the foundation stayed,” Ian said, “but we took the house down to the studs.” Another issue the Allen team encountered was bad soil. According to Ian, “this home was built on highly expansive, clay soil, so it was a challenge for foundation work, planting, etc. Clay isn’t very plant friendly, so we had to do some excavating and re-compacting.”

One of the homeowners is an artist, so she was very involved in the colors and finishes that were used. They focused a lot on the windows and doors, trim, countertops, tile, and floors to make sure they were high quality and aesthetically pleasing. Ian said, “We used environmentally friendly products to make sure this was a healthy home.” 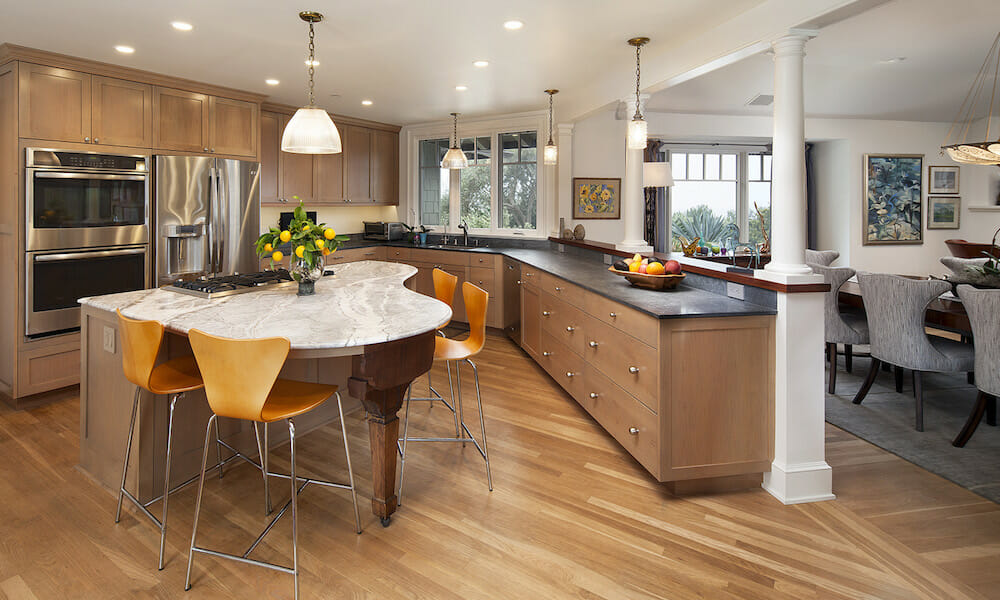 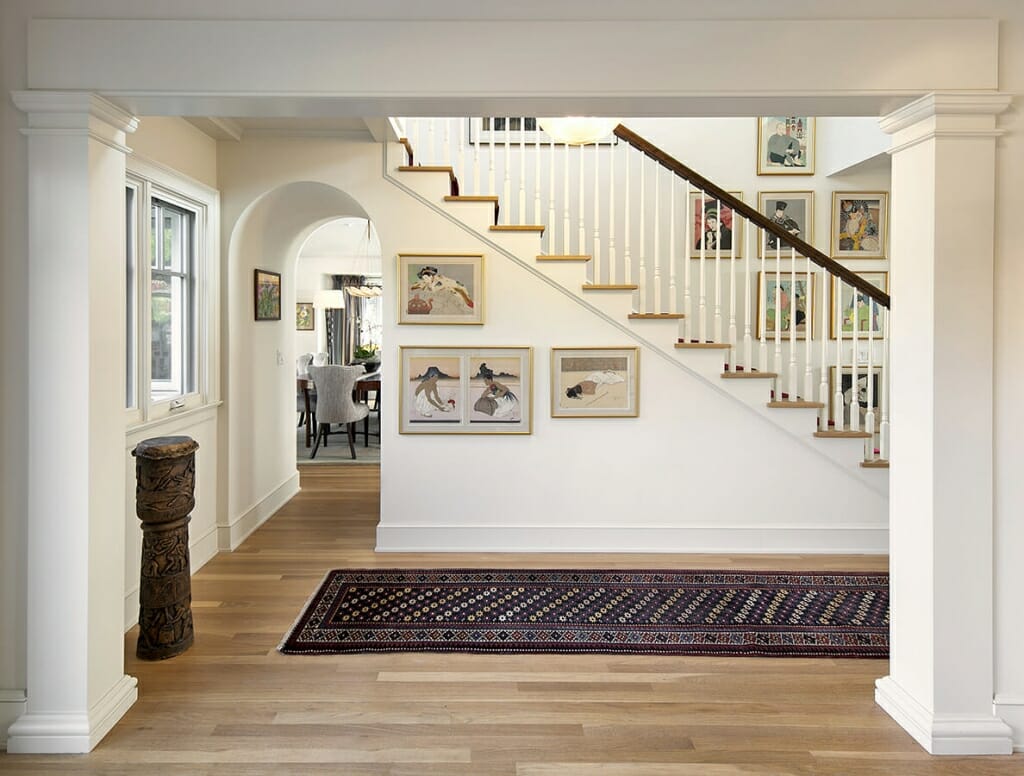 They used a James Hardie concrete shingle siding on the exterior of the home because it was, “good for withstanding fire, the bugs don’t eat it, it looks like wood shingle, paint adheres well to it, and it’s affordable.” 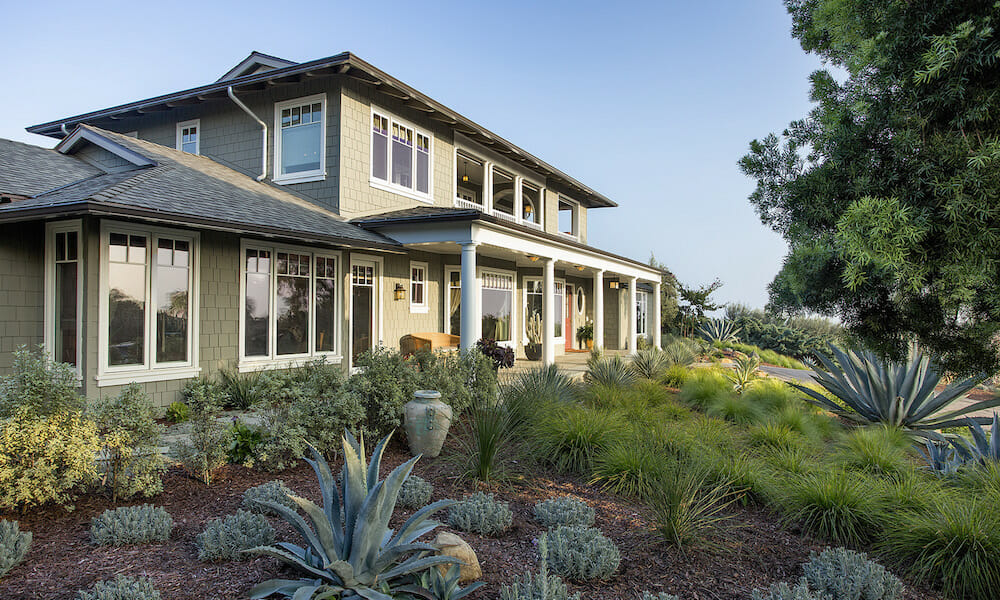 Another wonderful feature of the home is the outdoor living space. “The pool was existing,” Ian shared, “so we resurfaced it and the homeowners contracted an outside landscaper to work on the area around the pool. We helped with the site work and drainage and ended up having to move the hillside back quite a bit to give them more real estate beyond the pool.” 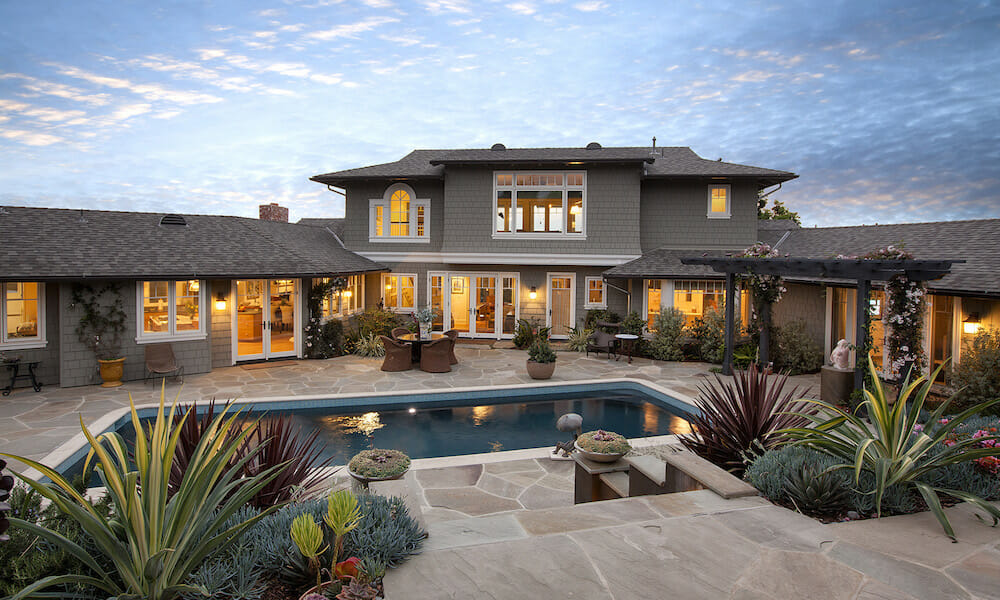 “This enabled us to give them more useable space that incorporated a nice sitting area up near the trellis.” 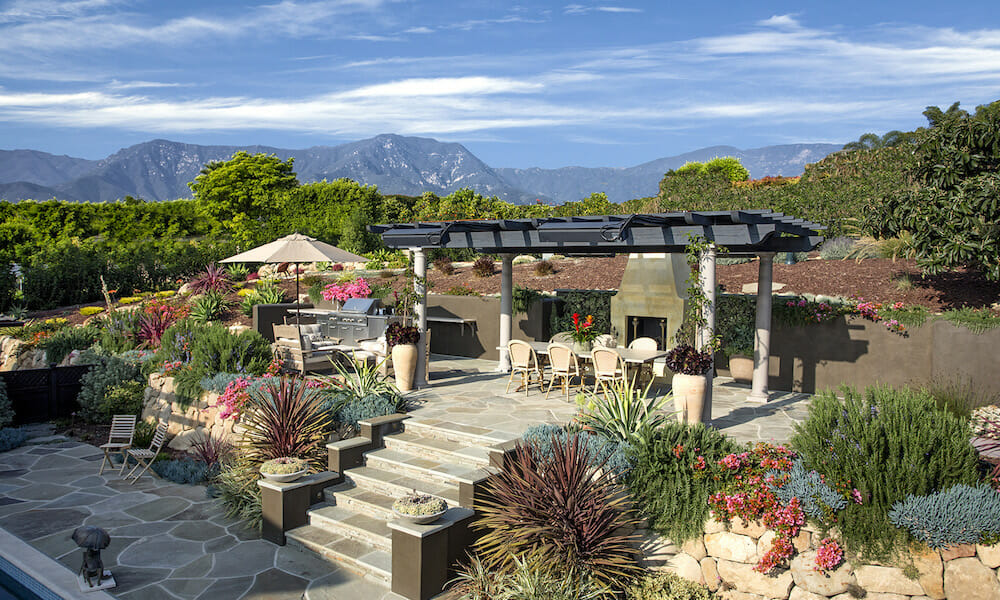 Overall, the project took about 11 months. Ian said, “The homeowners were very anxious to leave the East Coast. They were having one of the worst winters in New Jersey, so they really pushed us to get it done. They sold their house, moved their furniture, and were ready to move in.”

“The homeowners made the project because they were excited and enthusiastic. They were also able to make the right decisions and make them quickly. The biggest change we made was adding a window in the closet, so that’s a testament to how well thought out the design was from the beginning. We also worked with Architect, Peter Becker, and Interior Designer, Randy Franks. They both were instrumental in making timely decisions, which kept the project moving along.”

This is truly a grand transformation that took a ton of work to bring to life.

“I’ve been doing this for 35 years and this is one of my favorite projects,” said Ian. “It all comes down to the people and we’ve developed a lifelong relationship with them. My wife and I are happy to have then as new friends and enjoy socializing with them. They are a wonderful couple and a great addition to our town.”

If you’d like to learn more about Allen Construction, visit their GuildQuality profile page.