Since we began this survey back in 2008, we’ve seen rather significant gains in confidence in both market performance and overall business performance. In this review, we’ll examine the results indicating how our respondents feel about the current state of the market, how they expect the market and their company performance to change in the upcoming year, what their long and near-term strategies are, and which industry trends they believe are rising and waning. 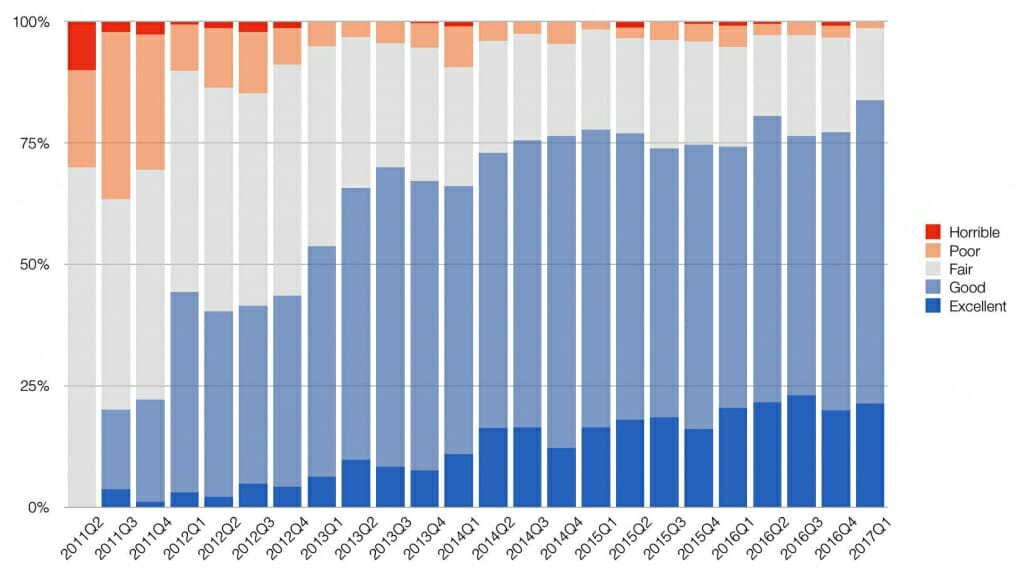 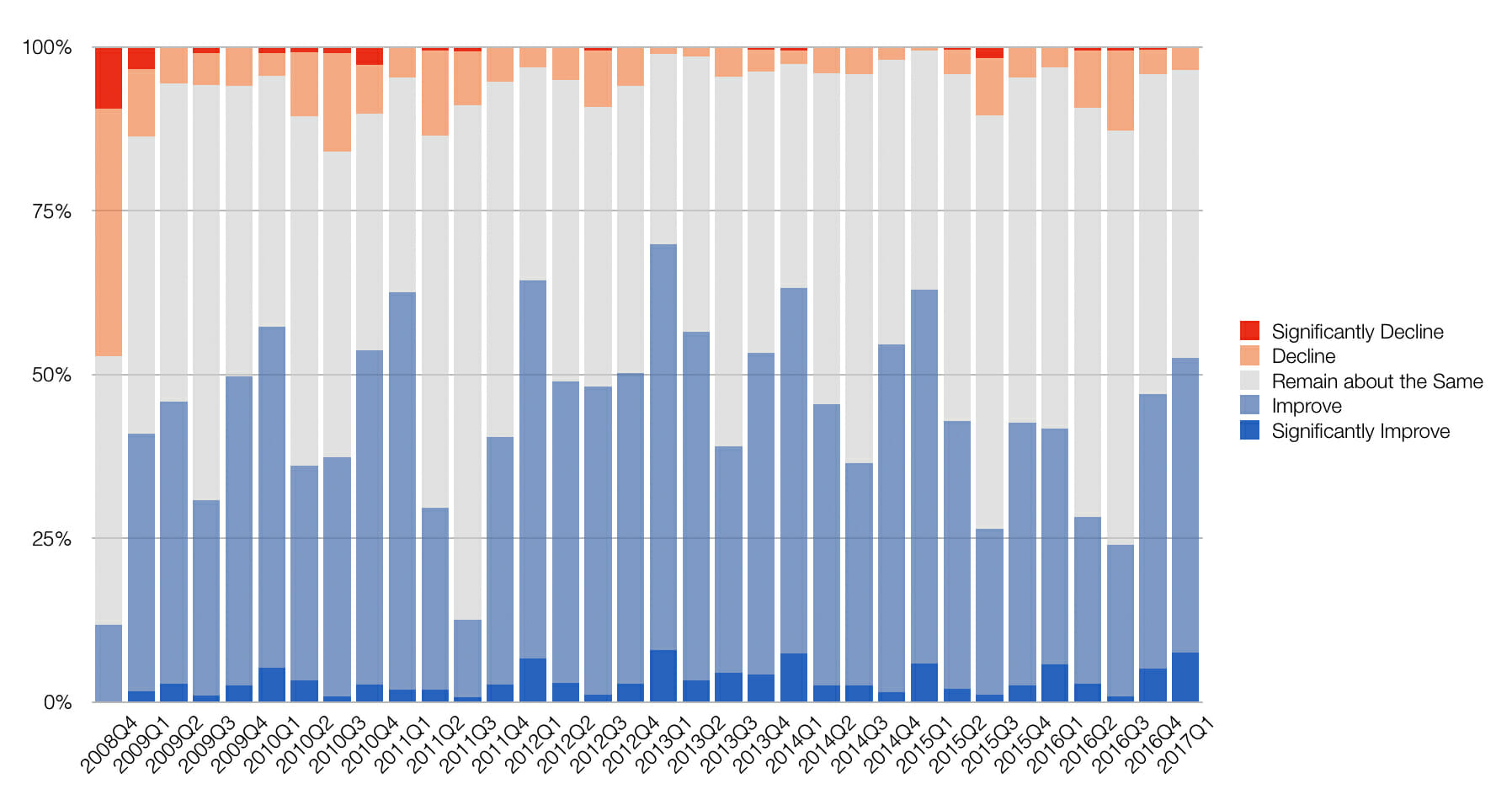 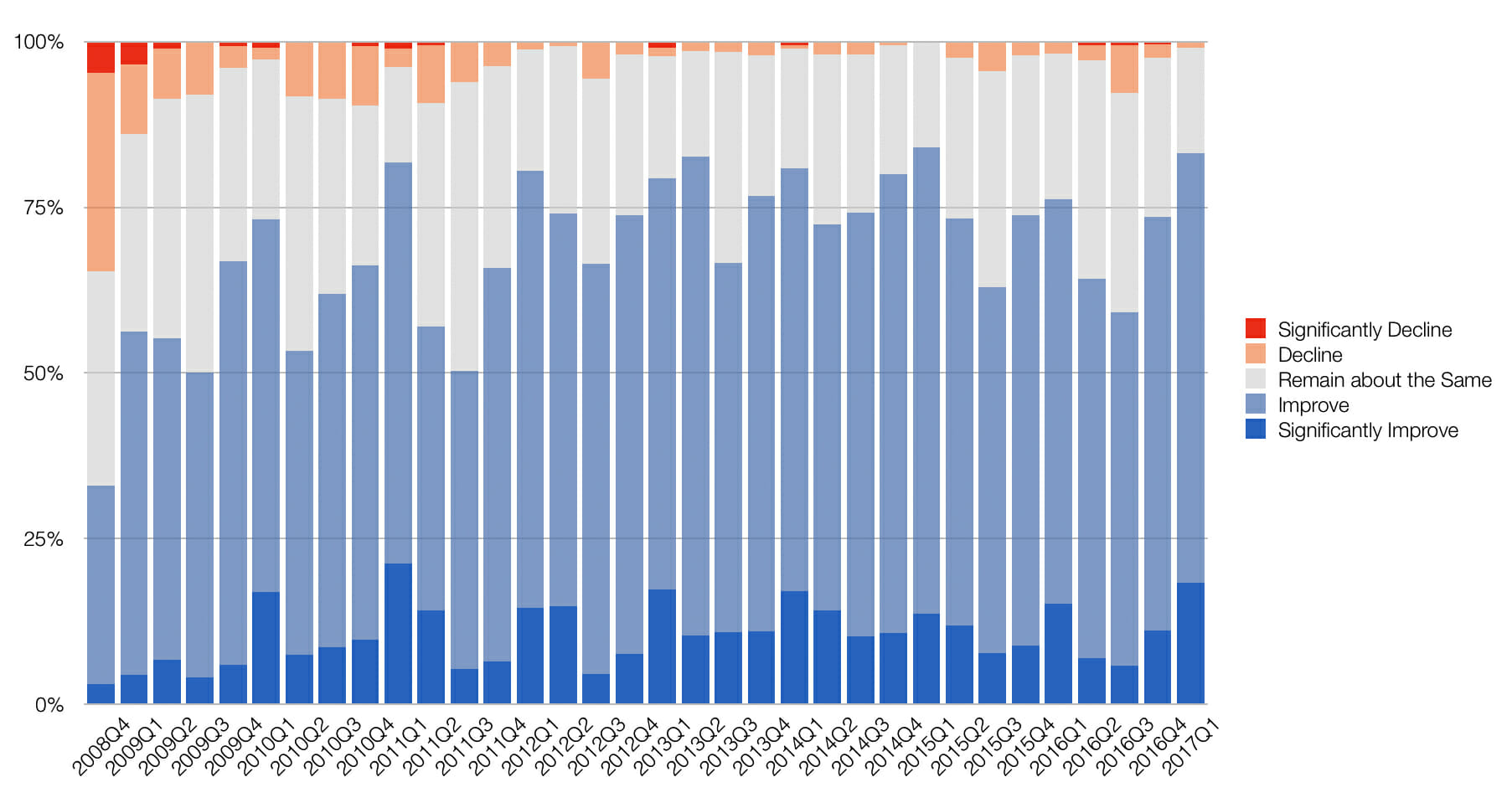 We asked respondents what new or existing trends they saw more of in the industry in Q1 of 2017. The three most common emerging trends were:

More and more adults 65+ are staying in their homes longer or moving in with their adult children, requiring certain renovations and accomodations to be made (i.e. apartment-style basements, one-level living, etc.).

We also asked respondents which existing trends they saw less of in Q1 of 2017. According to their answers, here are the trends they believe are on the way out:

For the third quarter in a row, respondents reported that the qualified labor shortage continues to be a rather large problem. Like Q3 and Q4 of 2016, many are focused on recruiting and hiring industry professionals in the near-term, as well as providing better training to new hires. We reported similar results in our 2016 Q4 Market Predictions Survey Results.

Our biggest challenge continues to be finding quality craftsmen; we’re working tirelessly to ensure that those we do hire are absolutely top-notch and receive appropriate training.

Other near-term strategies include:

In addition to maintaining the highest level of customer service, we understand our crew also needs to be happy, so we’re giving out more bonuses, hosting more events, and checking-in with them on a regular basis.

Similar to last quarter, respondents were most focused on improving marketing, advertising, and communication initiatives in Q1 of 2017.

To us, advertising is crucial. We want our business to be known throughout the city, and when people see our sign, hear our name, or find us online, they know exactly what we do.

Below are a few additional comments from our respondents that we thought encompassed their overall struggles and successes of working within the residential construction industry.

We sense a boost of confidence in the economy. Customers seem to be less concerned about the future and willing to sign on to or proceed with bigger projects.

Providing customers with exceptional customer service is increasingly important for all business types. If a customer experiences poor customer service, you better believe they’re going to communicate their unhappiness somehow – either to the business directly or online for everyone to see.